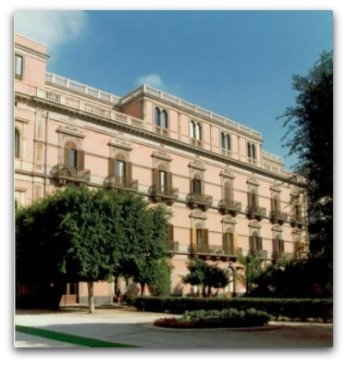 The Instituto Musicale Vincenzo Bellini (Vincenzo Bellini School of Music) of Catania is today a provider of higher education for music operating within the European Higher Education Area.

Despite being the birthplace of Vincenzo Bellini, it was not until the middle of the 20th century that Catania had an established music conservatory. The first initiatives for musical training in Catania are recorded at l’Ospizio di beneficenza (an old institution which began as a Jesuit college on 7 April, 1555, in the historical location of via Crociferi 17), but in the city chronicles no traces can be found of any systematic initiatives until  1951.

Immediately after the war in 1947, the city council of Catania considered regulating the activities of the Bellini Theatre, establishing a delegation and a superintendence dedicated to its development. The new management decided to establish a choir school and an orchestra school, in order to renovate the mediocre choir and build up the orchestra. Within just a few years, the investments made in the Bellini theatre school were to prove fortuitous but also to reveal its limitations, therefore making the question of the need for a musical school in Catania all the more pressing.

The celebrations for the one hundred-and-fiftieth anniversary of the birth of Vincenzo Bellini will remain a memorable occasion for the city of Catania. In an atmosphere of festivity and on the wave of a great sense of nationhood, on the 3 November, 1951, the people of Catania had a chance to listen to Renata Tebaldi, performing Giuseppe Verdi’s Requiem in the cathedral in the morning, and in the evening Maria Callas, who gave a memorable performance in the leading role of Norma at the Theatre Bellini. The following day, on 4 November, 1951, the Catania City Council, the Province of Catania and the Chamber of Commerce, with the implementation of act 36076 by Notary Eusebio Mirone, set up a consortium for the  establishment of a school of music that would perform the role of  “of providing instruction in the various branches of the musical arts, according to the stipulated regulations, to any person who applies and is admitted to attend courses; for the diffusion and cultivation of the musical arts through public and private events”. The creation of the institute was given exceptional importance in the city, as the comments recorded at the first public assembly by the Consortium testify, held in the Aula Magna of the University. Prefectural recognition arrived the following year with Decree 41583 on 13 September, 1952. Soon the success of the music school was amply demonstrated  by the rapid growth of student numbers and with the establishment of new courses.

The first location of the music school was in an old building that had been purposefully restored in via Vittorio Emanuele 182, near the house where Vincenzo Bellini was born and overlooking the  ruins of the Greco-Roman theatre. In 1979 the school moved to a new location, much larger than the one before, to  via Santa Maddalena, 29, the building of the former notorial archive. Following this, on 19 November, 1984, the council administration acquired the building of the Sacro Cuore college in via Etnea, granting exclusive use to the music school for the purposes of transforming it into a public conservatory of music. The official handing over of what was to become the permanent location of the institute took place on 27 April, 1985.

In the closing decade of the last century the City Council and the Province of Catania implemented changes to the administration of the consortium, naming it the “Istituto Musicale Vincenzo Bellini” the ex “Liceo musicale pareggiato Vincenzo Bellini” and created the right economic conditions for a development of the institute, providing it with the courses that were still lacking and bringing into line all of the courses that had not been standardised by the Royal Decree n. 1170 of 1930, so as to ensure that the provision offered by the institute was as comprehensive as possible.

At the beginning of the new millennium, a following the introduction of Act 21 n. 508 brought into force in December, 1999,  the Istituto Bellini (like all of the other Italian institutions belonging to the sector of Alta Formazione Artistica e Musicale (Higher Musical and Artistic Education) underwent a  considerable process of reform in accordance with standards drawn up by the European Union education reform agreement known as “the Bologna Process”. As a result of this process,  the Istituto Bellini completed the iter transformation to Istituto Superiore di Studi Musicali in accordance with Act 508, iter, which was initiated on 4 June, 2004  in accordance with the statute, approved by the decree executive M.I.U.R. – A.F.A.M.  n.114 (in application of the D.P.R. 28 February, 2003, n. 132), and was finalized 21 December, 2010 with the enactment of the Minsterial Decree prot. 8847/2010, through which the new teaching regulations were definitively put into place approved by the executive decree M.I.U.R – A.F.A.M.  n. 267 of 16 December, 2010 (under the D.P.R. 8 July, 2005, n. 212). These formal steps, which resulted in the recognition of the status of institution of  higher education at university level in accordance with art. 33 of the Italian Constitution, in conjunction with the acquisition of the Erasmus University Charter and membership of the European Association of Conservatories of Music (AEC), has made the Catania Istituto Superiore di Studi Musicali Vincenzo Bellini today an establishment of high musical training that is perfectly integrated within the international circuit, operating according to the EU recommended guidelines for university level higher education institutions within the Europe 2020 Framework.